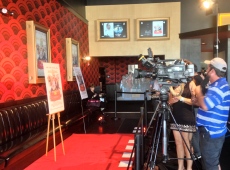 The Alamo Drafthouse literally rolled out the Red Carpet for celebrities on Sunday, to promote a new holiday movie and to help raise money for a good cause.

“The producers of Angels Sing reached out to us to do a benefit screening,” said Carolyn Schwarz, Executive Director of Ronald McDonald House Charities of Austin & Central Texas. “With the wonderful family theme of the movie, and all the Austin musicians involved, it was a natural fit for us.” 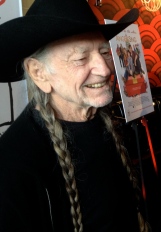 “Willie signed up, what’s not to love?,” executive producer Randall Dark said on the Red Carpet. Dark, along with executive producers Mary Dickinson and Charlene Fisher (Cowgirl Up Entertainment, Austin), and Scott and Sharon Rankin, shepherded the film from a long-ago SXSW local screening, through the labyrinth of Hollywood production processes to bring it back to town just in time for Christmas. The film was directed by Tim McCanlies (Second Hand Lions), and released November 1st.

Ticket holders for the Alamo charity screening event were also rewarded with swag bags that included signed copies of “When Angels Sing: A Christmas Story.” The little red-covered book on which the movie was based was published in 1999, and written by Turk Pipkin, who was also in attendance. Pipkin said he wrote it as a Christmas gift for his family. Pipkin is a longtime Austin resident and now plays Uncle Theo in the film. He says that making his book into a movie set in Austin, had a lot to do with making the film.

“Hollywood didn’t make this move. Austin did,” Pipkin enthusiastically told press and ticket holders seated in the overflow theater at the Alamo event just before the screening. The city of Austin is indeed personified in Angels Sing. Opening scenes show Connick and Canterbury cavorting with each other and a remote-controlled airplane as father and son on the banks of Lady Bird Lake, the unique Austin skyline watching over them.

The Trishas as neighborhood carolers

Later in the film, when Connick’s character – new Austin homeowner, Michael Walker – asks a group of Christmas caroling neighbors (The Trishas) if everyone in the neighborhood is a musician, one singer (Savannah Welch) happily responds, “Yup! Welcome to Austin!”

Dale Watson sings at The Salt Lick in Driftwood

Angels Sing was actually shot in Austin and Bastrop. The book-as-film does play something like a Christmas gift to the Austin area, with local sights and sounds so familiar, even Driftwood’s Salt Lick BBQ has a role. Musician Ray Benson appears as the Salt Lick Pit Boss, and Dale Watson provides live entertainment in a familiar corner of the familiar joint (did they flip a coin for who did which?). Cameo appearances of other locally known faces, places, and voices abound, including Michelle Valles – formerly on-air with KXAN in Austin, now at KNBC in Los Angeles – who plays an Austin TV news reporter (reprising her real life local ‘role’) for Angels Sing. 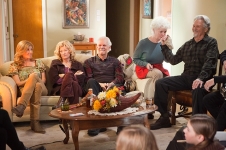 Overall, Angels Sing is a sweet, family-friendly holiday film that definitely tops Santa’s “Nice” list. It has the look and feel of a Hallmark movie but the big cast on the big screen elevates the movie above made-for-TV fare. Stars include Harry Connick, Jr. as Michael Walker; Connie Britton as his wife, Susan; Kris Kristofferson as “The Colonel” (father to Connick’s character); Eloise DeJoria as Laura; Willie Nelson as Nick; and up-and-coming Chandler Canterbury – born and bred in Houston – as Connick & Britton’s son, David. The story is somewhat predictable but not formulaic, and there are two good plot turns to move the storyline along. Of course, there is also a heartwarming ending and that should never get old for the holidays. It’s the kind of movie you want to own and watch during the holiday season every year.

What really makes Angels Sing special in the family Christmas movies category is the music. It is delightful and original with appearances by plenty of music makers, including Lyle Lovett (a scene-stealing nutty neighbor in an endless wardrobe of wacky Christmas wear), Bruce Robison, Dana Wheeler-Nicholson, Marcia Ball, Sarah Hickman, Bob Schneider, Carolyn Wonderland, Ms. Lavelle White, The Trishas, Joe Morales, Sahara Smith, and Joel Guzman and Sarah Fox, to name just several out of many more. The one disappointment was the absence of a musical performance by the richly talented Harry Connick, Jr.; perhaps, because the focus is clearly on local Austin talent. Regardless, the soundtrack will make a refreshing addition to anyone’s holiday music collection.

Ernest James as a friendly Barista

Another enjoyable scene-stealer is the cheerful, overly zealous coffee shop barista, played by Ernest James. His Angels Sing character is the polar opposite from his turn as corn-rowed thug, Calvin Brown, played by James  in 11 episodes of Friday Night Lights, also filmed in Austin. 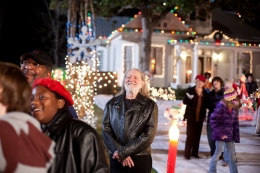 Hometown hero Willie Nelson is good in his role as Nick. Of course, we know the character Nick’s first name is really St. Nick, and perhaps Willie’s outlaw edge doesn’t quite fit that bill. But playing Nick looks good on the just-turned-80-year old. Willie’s eyes shine in the movie, and when he talks about his role on the Red Carpet. One might even say his smiling eyes crinkle, much like the Big Man’s would. When asked on the Red Carpet if he might just really be Santa Claus, Willie laughed and said, “Well, my kids think I am!”

Don’t we all, Willie?