The Dripping Springs Community Foundation kicked off its 2nd annual Givin’ Where I’m Livin’ (GWIL) campaign at The Terrace Club in Dripping Springs on Thursday evening. Despite winter storm warnings, enthusiastic representatives turned out from 8 of the 14 local non-profits registered for the campaign. Their efforts were rewarded with a food and refreshments spread, followed by an overview presentation of the campaign by several members of the DSCF board. Attendees also received a GWIL2014 “Tool Kit” bag that contained a 2014 Dripping Springs Non-Profit Organizations & Clubs Directory, a GWIL2014 logo window cling, and a computer thumb drive preloaded with documents and images created for them to use to promote the campaign to their donors.

“We enjoyed getting to network with the other non profits that braved the cold,” said Friends Foundation board member, Kathy Carriker. “The presentation was excellent, and the GWIL 2014 Tool Kit materials are well-organized and provide valuable aids in getting our message out.” 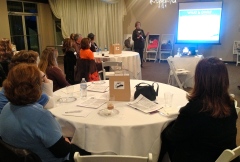 Representatives from the participating organizations were not the only ones enthusiastic about the campaign and the kickoff event. “The DSCF board is really excited about the 2014 GWIL campaign,” board president, Susan Santamaria said. “The Terrace Club is a beautiful venue, we had a great turnout despite the storm, and there was a lot of enthusiasm in the room.”

END_OF_DOCUMENT_TOKEN_TO_BE_REPLACED 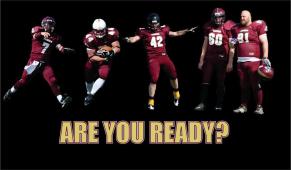 Here’s a high school football story fans don’t get to see in real life every day: Guys who’ve already graduated, reliving a deep-seated rivalry by playing a full-pad, full-contact tackle football game for the community, in their former stadium, with a high school band, cheerleaders, and halftime entertainment. When and where does this happen? At Tiger Stadium in Dripping Springs, on Saturday, March 1, 2014, at 7:00p.m, when fans can come out and cheer former Dripping Springs Tiger players, lined up against former Lake Travis Cavaliers, all suited-up to relive their glory days. About 40 players are signed up for the Dripping Springs alumni team this year, but they’re playing for more than bragging rights. They’re also playing for a good cause and a unique community story.

The annual alumni football game has been taking place without much fanfare since 2011. Organizers have upped their game for 2014, by partnering with Gridiron Glory Alumni Football, which helps to support efforts to secure gear, a facility, and promotional tools. But more likely to give this year’s game a higher profile is the decision to dedicate a portion of the proceeds from the annual contest in memory of Coach Keith Tuck, a winning and beloved athletic coach at both Lake Travis and Dripping Springs, who passed away unexpectedly in late 2013, at home in Dripping Springs. Even better, those proceeds will go toward the annual Brittany Tuck Memorial Scholarship fund for local high school athletes, started by Coach Tuck himself 10 years ago to honor his 19-year old daughter, Brittany – an award winning softball player – who died in a tragic car accident.

Alumni game founder and former DSHS QB and graduate (1995), Ryan Bonnett – along with Coach Tuck’s wife, Sandra Tuck – tell the rest of the story, in their own words:

RYAN: HOW DID COACH TUCK’S PASSING IN 2013, IMPACT PLANS FOR THIS YEAR’S CONTEST?

This is the first year we have partnered with Gridiron Glory Alumni Football. We felt that the owner, George Cox of Leander, has many of the same ideas on how these games should be run, and what they are really about. I began meeting with him in July of last year to plan the 2014 game. Then, on November 7, 2013, it all changed. I could not believe what I was hearing! Coach Tuck had passed away suddenly. The big, strong, caring man who seemed so invincible? It was a shock to everyone that knew him.

SANDRA: HOW YOUR FAMILY IS DOING?
First of all, we would like to express our sincere gratitude for all of the support we have received from the Dripping Springs Community.  We are truly blessed to live in such a caring environment. Our family is doing ok and taking each day one day at a time. We are holding onto the many wonderful memories we have of him.
Ten years ago, we lost our daughter, Brittany, and as Keith always said, we are just trying to find a “new normal.”  Once again, we are trying to find another new normal.  But things will never be normal or the same again.  Our family has been able to spend a great amount of time together since November, which has helped each of us deal with our devastating loss.
RYAN: THIS YEAR’S ALUMNI GAME WILL BE DIFFERENT IN MANY WAYS. HOW SO?

A couple of days after Coach Tuck passed, I just had the thought; What if we make this game a memorial game for Coach Tuck? I waited a couple of weeks to reach out to Jeff Tuck to share my ideas with him. Jeff talked with his mother, Sandra, and his sister, Megan, and they were all for it. Since then, the idea has just taken off! We put up the Keith Tuck Memorial Football Game page on Facebook to help spread the word, and it got over 500 “Likes” overnight. It’s now up to more than 1,200, and growing. So it is not just about the players anymore. We have an opportunity to honor a man who meant so much to so many, and it’s only fitting that it is between the two schools he coached and had the most success of his career.

RYAN: HOW HAS ADDING JEFF TUCK TO THIS YEAR’S ROSTER CHANGED THE GAME FOR YOU?

Coach Tuck’s son, Jeff, playing with us adds a whole other dynamic. The emotions will be at an all-time high for this game. Our hope is that we not only honor Keith Tuck in the game, but also help local students by donating proceeds to his daughter Brittany’s memorial scholarship fundraiser, which has become a very popular annual event and will take place this year on the weekend following the football game! But mostly, we hope to help the Tuck family heal through our play in coach’s honor, and through the continued love and support of both communities. We want them to continue to know how much their husband, father, brother, son, cousin, or uncle meant to all of us, and how much the family continues to mean to this community.

SANDRA: WHEN DID YOU FIRST HEAR THE IDEA TO PLAY THIS GAME IN MEMORY OF COACH TUCK, WITH PROCEEDS FOR THE ANNUAL BRITTANY EVENT?

I first heard about the idea of the alumni game being renamed the 1st Annual Keith Tuck Alumni Football Game after Ryan Bonnett contacted my son, Jeff.  He called Jeff to invite him to play in the game and asked him if our family would be ok if they renamed the alumni game.  Our family was honored and gave him permission to do so.  We are very grateful for everything Ryan has done to promote this event and honor the Tuck Family.  The proceeds will hopefully help to fund more scholarships.

Alumni QB Ryan Bonnett puts the ball in the air in the 2012 game.

RYAN: HOW DID YOU KNOW COACH TUCK OR WHAT ARE SOME OF YOUR MEMORIES OF HIM?

I first heard about Coach Tuck when I was 16, a sophomore at DSHS, and I was dating a freshman from Lake Travis who ran track for him. I had the pleasure of meeting him that year at a couple of her track meets. Fast forward 15 years, and I had the pleasure of meeting Coach Tuck again, when my youngest daughter, Madison, played softball and attended all of his yearly camps. The thing that always struck me most about coach Tuck was his special combination of toughness and END_OF_DOCUMENT_TOKEN_TO_BE_REPLACED