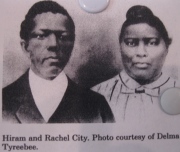 Hiram and Rachel City were prominent members of the freedmen’s Peyton Colony, established following Emancipation near Dripping Springs. Descendants of freed slaves still live there, on FM 165 just beyond Henly.

Hays County Courthouse, San Marcos, TX – The Hays County Commissioners Court this week proclaimed the month of June as Juneteenth Month in Hays County, in recognition of the June 19 date in 1865, when word finally reached Texas that slaves had been federally freed. The Emancipation Proclamation was issued January 1, 1863.
County officials and employees join with San Marcos’ Dunbar Heritage Association in its annual celebration, which includes a charity barbeque cook-off, banquet and a cake auction to raise funds for scholarships. Typically a parade is a highlight of the festivities, but this year’s parade was canceled earlier this week so that participants could attend the Saturday funeral of a longtime organizer of the events, Nelvia (Nell) Burleson.
The proclamation called on “all citizens of Hays County to celebrate this significant event throughout the month and to recognize the importance of Juneteenth to human freedom so cherished by the United States.”