Active duty Army reservist, Phil Waldron, is a Dripping Springs resident and the Director of Operations for Progressive Combat Training Skills on Heather Hills Road.  He trains there to keep his combat skills sharp with a handful of retired Army Special Forces and former Navy Seals, so they can train others in self-defense. Clients have ranged from law enforcement officers to civilians but Waldron and his colleagues are being approached by a new group of students: Area women who want to learn how to defend themselves after news in early November, about a violent attack on a woman driving through San Marcos, with her 4-year old child in the car: http://www.kvue.com/news/local/San-Marcos-police-investigating-kidnapping-sexual-assault-of-woman-with-4-year-old-231009081.html

It’s no secret that crime rates are on the rise around the Austin area, but it is especially alarming to area residents that violent crime to seems to be spreading to the surrounding Hill Country. Waldron says requests are on the rise from local women who are worried.

“Lots of women are asking for training,” Waldron said. “They want to learn how to fight back.” 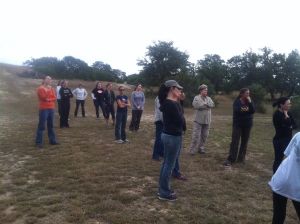 Waldron and his colleagues developed the Unarmed Combatives Clinic in response to those requests, and specifically to news of the recent attack in San Marcos. The first local clinic was held Saturday, 11/16, from 2:00 – 4:30p.m., at the private Progressive Combat Skills training facility off of W. Fitzhugh Road. Waldron said the clinic was free of charge, with about 30 participants coming out, including “several mom/daughters, husband/wife and friend groups.”

Kristy Krueger has lived in Dripping Springs for 30 years, and said she learned a variety of basic self-defense skills on Saturday. “It was great that they showed us several ways to respond to an attacker and how to break free,” Krueger said. “I would recommend it for any woman of any age, and men, too.”

Husband and father Dave Stewart did not attend the clinic, but women in his family did. “My wife and 3 of my daughters were at the training on Saturday,” Stewart posted in a comment on the Progressive Combat Skills page on Facebook. “They came home excited and confident after the training. It makes a man feel a lot more comfortable that they know what to do if something happens. THANKS!” 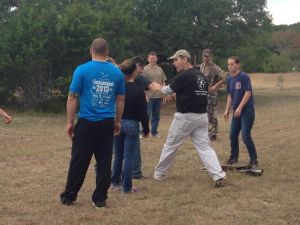 Waldron says the clinic will be offered again on Saturday, December 7th at 3:00pm, with plans to continue the clinics into 2014. The clinics are free of charge but limited to 30 participants. Enroll online for a ticket to attend: